As an Accredited Practitioner with the Academy of Brain-Based Leadership (ABL), I am delighted to work with people teams and organisations to build psychological safety.

Neuroscience research has helped to raise awareness in ways not possible before, to recognise that as society has evolved, our brains have become acutely sensitive, not only to physical threat, but to the psychological threats we experience in our social interactions – things like attitudes, behaviours, and perceived motivations.

What is Psychological SAFETY?

Psychological safety is a shared belief that the team is safe for interpersonal risk taking. It can be defined as “…being able to show and employ one’s self without fear of negative consequences of self-image, status or career”.  (Edmondson, 2014)

Why is Psychological SAFETY important?

While well-defined parameters exist for defining the importance of physical safety as it relates to being socially acceptable, harmful or helpful, the same can’t be said for psychological safety. Thanks to recent advances in neuroscience, we are now beginning to understand the importance and impact of psychological safety, not only within teams but for our own health and well-being. For example, it has been demonstrated that the same area of the brain which deals with physical pain also manages emotional pain/rejection.

It turns out that a “hit” to our psychological safety (through bullying or social rejection) can have a stronger impact on that brain region than if we were punched in the face. When our psychological safety is threatened, our brain is triggered into a stress response which compromises our cognitive abilities. In this state our higher, logical brain, goes offline impacting our ability to think, be creative, make decisions, and regulate our emotions.

Why is it relevant now?

In 2015 Google published the results of “Project Aristotle” which was an in-depth study to find the factors common to a high-performing team. Their research on hundreds of teams within Google showed that psychological safety within the team was a critical factor to success. Basically, they showed that teams with psychologically safe environments had employees who were trusting, less likely to leave, more likely to harness the power of diversity, and ultimately, were more successful.

In a psychologically safe climate, team members are not afraid to express themselves; they feel accepted and respected. This openness creates a fertile environment for thinking, creativity, innovation, and growth, and leads to more collaborative relationships and an overall improvement in team productivity.

How do you build psychological SAFETY?

Based on neuroscience research, we can begin to increase our self-awareness of our own biases and triggers, and, appreciate different perspectives. This can help us manage our own psychological safety, as well as the psychological safety of those around us.

Adopting the premise that change and transformation happen one brain at a time, in environments where people are supported and nurtured, being able to offer new ways of facilitating awareness and insight at the 4 levels of self, relationship, team and culture is critical for leaders.  Given the complex challenges facing many industry sectors (increased expectations, tightening budgets, staff decreases) being able to operate in ways that more quickly and effectively lead to: 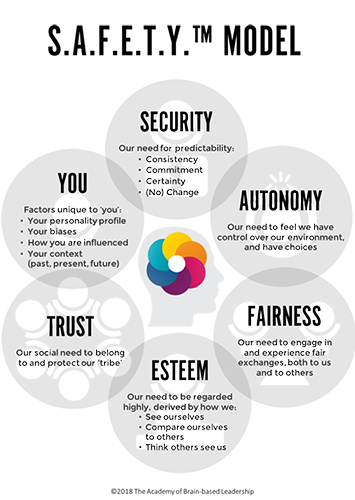 Based on neuroscience research, the S.A.F.E.T.YTM
The model describes six important social drivers of human behaviour and cuts to the heart of what creates most of our challenges, fears and stress. Understanding your drivers allows you to generate practical solutions to build and maintain psychological safety for yourself and others.